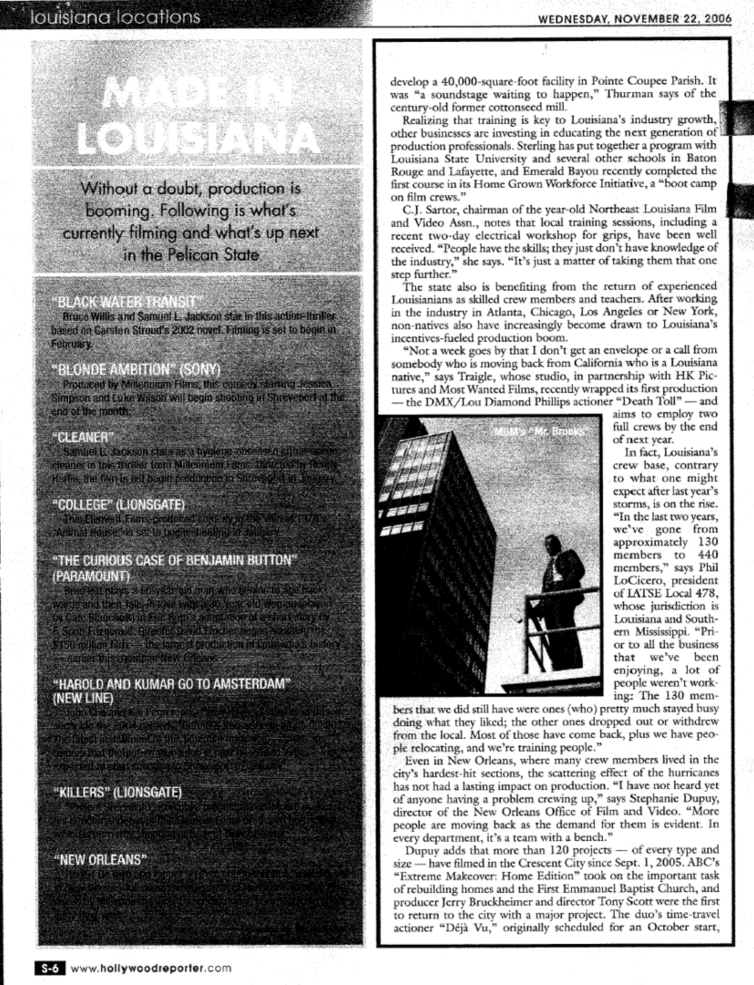 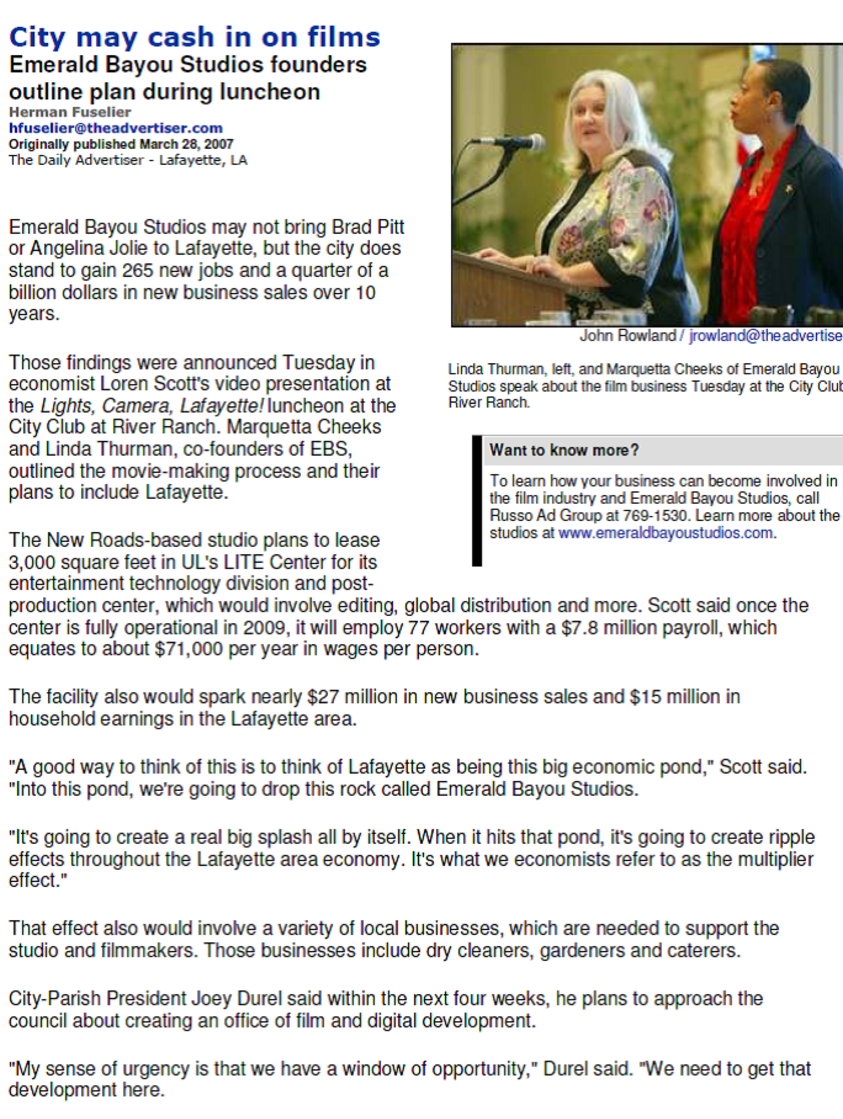 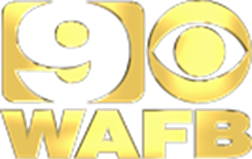 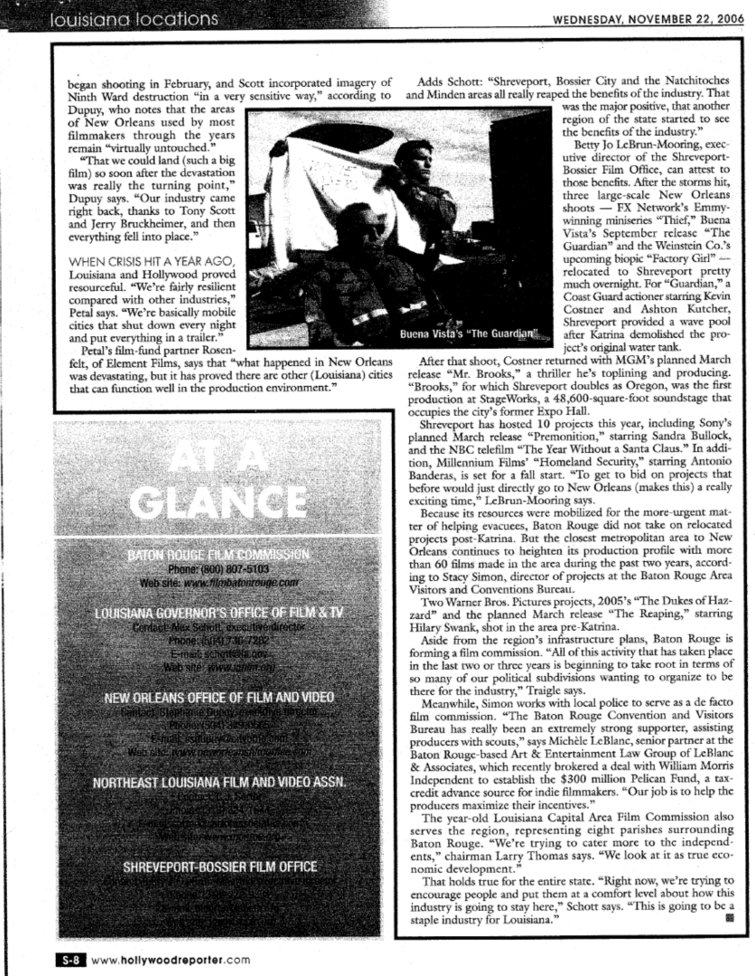 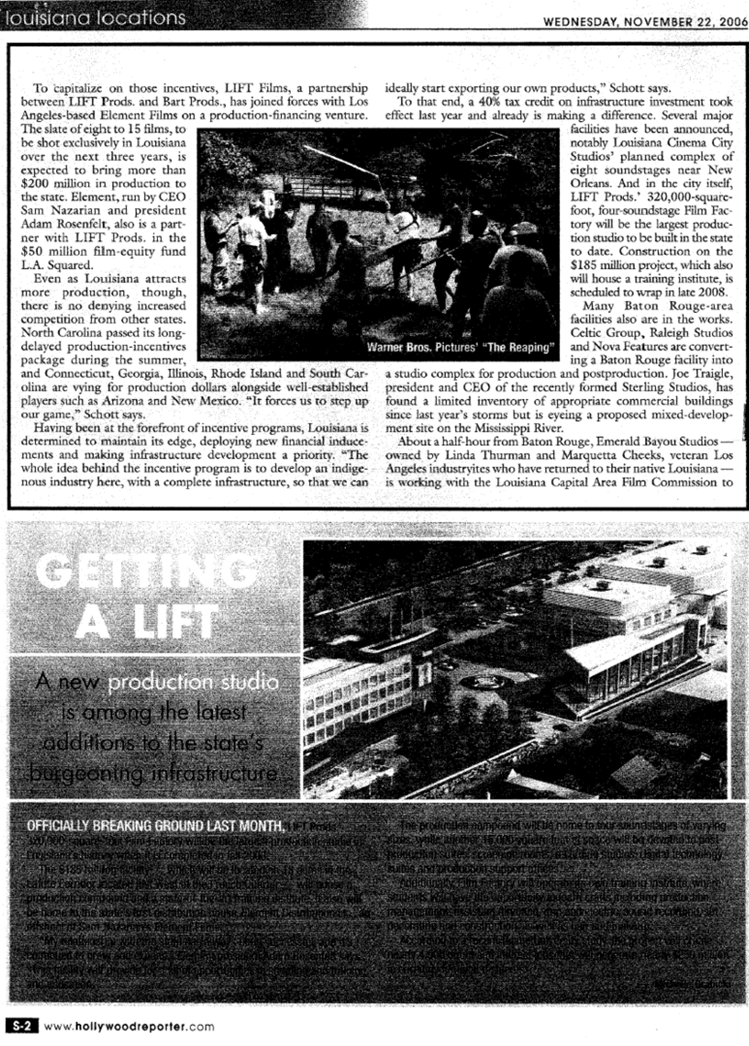 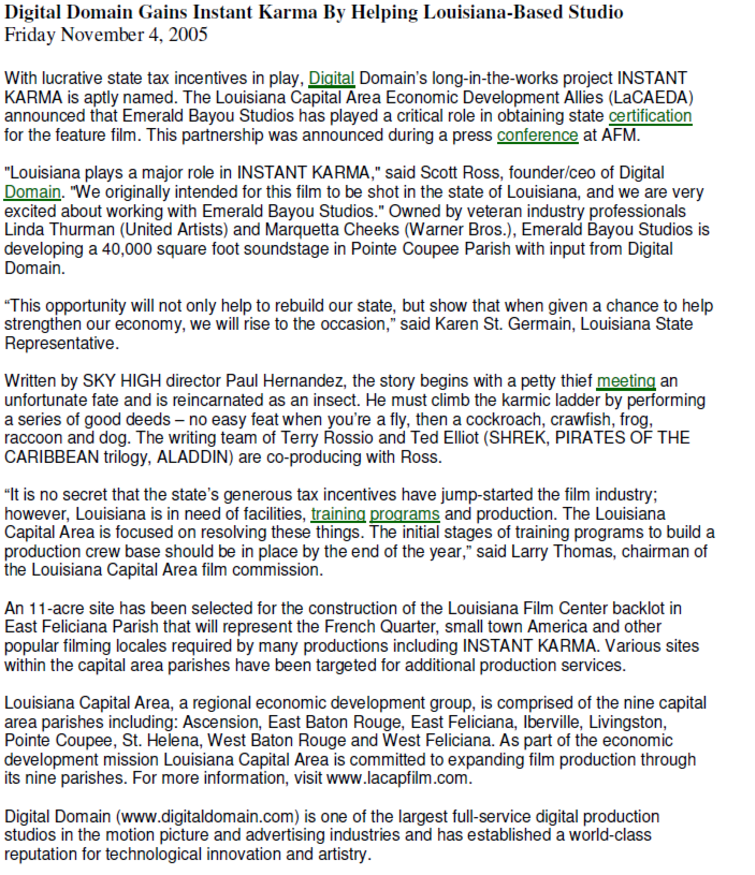 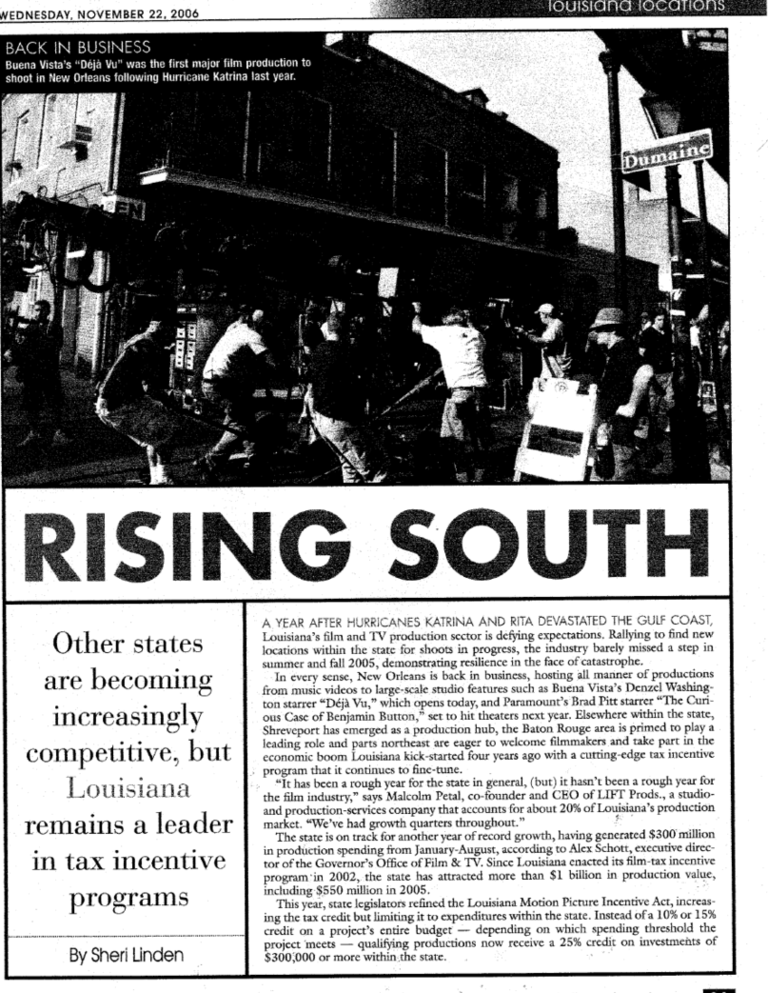 EBS recently announced plans to develop a 40,000 square foot film production sound stage at the Old Cotton Mill in New Roads. “We’re excited that our students will have the opportunity to participate in the film industry” says Amy Gauthier, Campus Dean, LTC-Jumonville.

The workshop will include “Introduction to Film Production and Jobs in the Film Industry” conducted by Scott Thomas, President of Louisiana Film Center and “How To Get Into The Movies” for actors and extras conducted by Brinkley McGinness of Robin Batherson Casting.

In addition, a panel discussion is scheduled with film production professionals. “Louisiana has a shortage of qualified film personnel and we are committed to the growth and development of an indigenous film production crew,” states Marquetta Cheeks, President of Production for

Emerald Bayou Studios. The workshop is free and open to the public. Due to limited space all interested participates are encouraged to register by Wednesday, March 22 at the web link above or (225) 296-7496 or call Amy Gauthier Campus Dean, LTC-Jumonville, at (225) 638-8613.

Lafayette, Louisiana – The internet technology of today began as a low-bandwidth data and communication link with university and research groups less than 30 years ago and has grown to the world wide web of commerce linking corporations and individuals. An entirely new network exists today connecting universities with a bandwidth power over a hundred times faster than today’s web and a Louisiana company is pioneering its use in film and video markets. Emerald Bayou Studios (EBS), in the city of New Roads, Louisiana, is not only building a new studio production facility -- and training film crews, but is also working with researchers on a new technology that will help filmmakers throughout the world.

Linda Thurman, President of EBS, came back to her home state after a career in film on the West Coast and saw the potential of this new media in growing the industry of Louisiana. “One of our goals at EBS is to not only to create facilities but the technical skills for film,” explains Thurman.   Part of that included a special grant for a film production training program at Louisiana Technical College-Jumonville Memorial Campus. Thurman continues, “We were shooting ‘The Glass Chord’ 40 miles from a major airport and getting dailies from our lab in Atlanta was a priority for EBS head of production Marquetta Cheeks.”

Thurman, a pioneer in entertainment technology, discussed the problem with Johnny Lawson, Manager of Visualization Systems at the new $27 million Louisiana Imaging Technology Enterprise (LITE) at the Technology Park in the University of Louisiana Lafayette.  They agreed the National LambdaRail (NLR) research network connecting major universities was a viable solution and formulated a Proof of Concept Test for the 40GB per second pipeline.  “If our test worked, it would make life easier for student filmmakers, not to mention the incredible commercial
applications,” notes Thurman.  Through colleagues in Hollywood, Thurman learned of Georgia Tech’s interest in digital media and contacted Savory, Executive Director of Tech’s Southern Light Rail (SLR), to project manage the test from Atlanta. Charlie McMahon, Executive Director for the Louisiana Board of Regents’ LONI network, was excited by Thurman’s proposal. “Compared to the complex research we conduct in other industries, this media test was relatively small, but in a field we had not considered,” McMahon points out.

​Since Thurman’s goal was to get the film images from the Atlanta lab, Georgia Tech was the origination point and Savory coordinated the many technical connections and teams from Atlanta to Baton Rouge to Lafayette.  “The test itself was relatively simple,” notes Savory, “as far as moving data from node to node, once we added the new high-speed optical fiber lines from the LSU campus to the end point in Lafayette.”

The Atlanta Lab probably had the easiest part. “We received the film shot each day by the student crews via FedEx and processed it,” notes Jim Ogburn, GM for Cinefilm. “We digitized the film in our Spirit telecine, converted it to data in our Final Cut HD system, and copied the files to a hard drive. That’s a normal process for most features.”  In the test, the drive was dropped off at Georgia Tech for high-speed transmission instead of being sent overnight, eliminating the two-day delay for projects on location.

An hour long film transfer in high def can require a 500GB file, too big for the normal internet. The test files created by Cinefilm and sent from Georgia Tech to Thurman’s offices at LITE were about 15 minutes long and 25GB in size.  Files that size would take over 20 hours if sent via the normal internet, but took only 6 minutes on the NLR 80GB 10GB network, faster than real time!  The Proof of Concept Test done between LITE and Georgia Tech could mean producers in Louisiana can save time and money by seeing each day’s film work sooner. “It’s like having a lab on location,” says Marquetta Cheeks of EBS.  This technology will probably become common place in 5 or 10 years, but the vision and tests for this were begun by Linda Thurman’s Emerald Bayou Studios in an effort to reduce the distance from lab to location and to grow a more productive educational environment for the continued growth of the Louisiana Film Industry.