Robert Obier Robert Obier, of Obier Studios, Baton Rouge has also practiced architecture in Boston, New Orleans, Dallas, and on the Gulf Coast. He holds a Bachelor's Degree in Architecture and is a graduate of the Master's Program in Industrial Design from the prestigious Art Center College of Design. With over 25 years of experience his work exploring the possibilities of architecture and innovation has been featured in numerous exhibitions, magazines, television and motion pictures. As project architect for the Intellihome Project in Dallas, Tx, he worked with experts in hardware and software design to create the most advanced computer managed and operated home of it's time. His innovative designs and renderings were recently profiled in an exposition at LSU entitled, "Living Architecture - A Legacy of Frank Lloyd Wright.

J. Scott Carter J. Scott Carter of Wylie Carter Architects is Emerald Bayous Studios Chief Architectural Advisor. He consults worldwide with top entertainment industry companies. His soundstages are considered the "best in Hollywood".  J. Scott Carter is a recognized expert at film and TV studio master planning, studio operation, and soundstage design. His Disney Stages 6 & 7 are highly regarded for functionality and convenience.Raleigh Studios Stages 11 & 12 are among the first, and the highest concrete tilt-up buildings erected in Los Angeles, and are renowned for their versatility and flexibility, setting new standards in performance specifications. His India studio's first three soundstages opened for business in January. The next five are to open later this year, He has designed studio facilities in Canada, Chile, Portugal, Russia, South Africa and elsewhere. In the USA, he has planned studios in Charlestown, Orlando, Baltimore, Albuquerque, Phoenix, Seattle, Miami, Shreveport, and continues to be active in Hollywood. 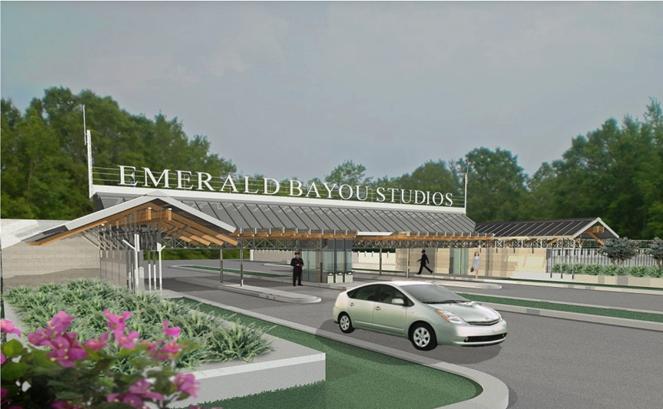